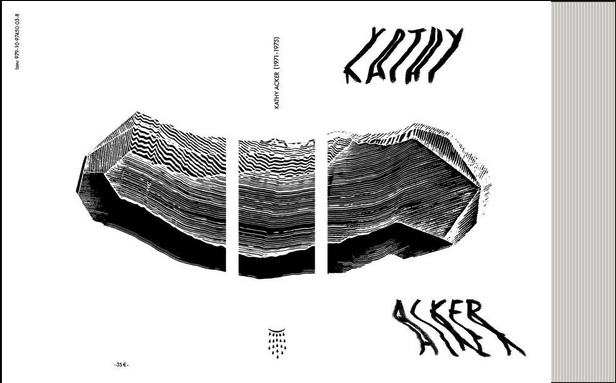 The book is the first attempt to produce a critical edition of a large number of Kathy Acker’s unpublished early works. The book also features  the transcription and presentation of Acker’s two 1974 experimental videos. With Introduction by Claire Finch, edited by Justin Gajoux. Published by Éditions Ismael, 2019.   Apart from the posthumous publication, in 2002, of the early manuscript Rip-off Red, Girl Detective and The Burning Bombing of America: The Destruction of the U.S.  by Amy Scholder and Grove Press in one volume, in 2002, as well as Gabrielle Kappes’ chapbook, no other important publication had been attempted in this field. These –  mostly unpublished – texts were all composed between 1969 and 1976. Yet they are representative of Acker’s published output only for the period running from 1971 to  early 1974. These texts all exist as “clean” typewritten copies, probably intended to be kept, shown, maybe even published. The editor chose not to include Acker’s manuscripts.  The transcriptions in this volume were made directly from the original typescripts. Original pagination, manuscript addenda, missing pages and other idiosyncrasies of each file have  been preserved; our editorial notes at the end of the texts all feature a material description of the source version used.  Claire Finch is a writer and researcher based in Paris. Her hybrid practice focuses on queer poetic protocols and their possible links with feminist activism. She works on her  PhD research in Gender Studies at the University of Paris 8, her performative readings and her literary piracy workshops. She wrote the introduction and editorial notes  for Kathy Acker 1971-1975, the first substantial English publication of Acker’s early typescripts. Claire Finch is a touring member of the Paris-based queer, dyke, non-binary and trans author’s collective RERQ.
‍