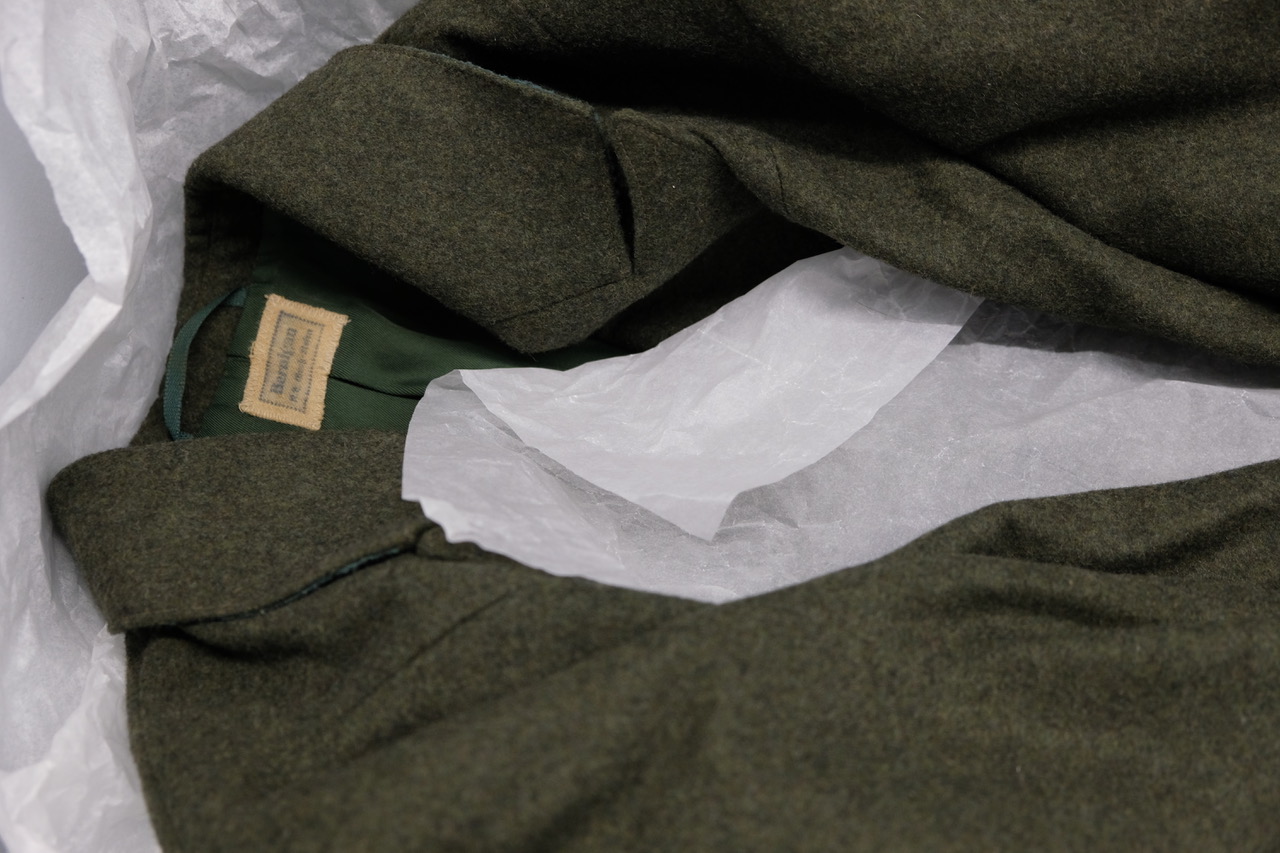 Expanding on her long-term research on the female guards at the Ravensbrück women’s concentration camp, Dominique Hurth examines and questions the representation and narratives of female perpetration, its imagery and stereotyping and the examination of female perpetration in the post-War period until today. Her research starts from, expands on and returns to one object: the female guard uniform, as the one held in the collection of the Ravensbrück memorial.

Unlike the male uniform of the SS guards or that of the Wehrmacht soldier, the object of the female warden uniform has hardly been historically researched. At the same time, the female concentration camp warden in uniform triggers a huge fascination in film, fashion design, literature, pornography or the internet. This gap between the lack of sources and material knowledge about the textile history of the uniform (Who designed it? By whom and where was it produced? Where is the cut?) and the presence of the uniform in the subculture up to the mainstream, underlines previously prevailing gender stereotypes.

In this public event, Dominique Hurth will weave together research,  images and texts gathered from several visits over the past months in memorial and state archives, military collections, costume and theater depots – in order to look closely at the textile history, the production and object biography of the uniform and highlight notions of forced labor, violence and gender representation contained within the uniform itself. She will be accompanied by the historian Simone Erpel and the author Hans-Christian Dany for short inputs followed by a discussion. The talk will be held in English.‍

Dominique Hurth is a visual artist working with installations, sculptures and editions. The starting point for new works is often a narrative present in localities or images. Even though her installations are often concentrated on the form, a long and detailed research is strongly embedded in the development of this same form. It is by ways of archival research, journalistic investigation, writing and material experiments that the works develop, and it is by way of editing that the  installation operates in the exhibition space. More about Dominique Hurth’s research here.‍

Hans-Christian Dany lives in Hamburg and writes. Sometimes this turns into books. His most recent publications are MA-1. Fashion and Uniform(Edition Nautilus, 2018) and Ode to Routine (Starship Verlag, 2020), soon to be published is No Dandy, No Fun, co-authored with Valérie Knoll (Sternberg Press, 2023). Since the summer, he has been publishing a series that can be read here.‍

Simone Erpel is a historian, academic author and curator based in Berlin. She has realized historical-documentary exhibitions and publications for the Jewish Museum Berlin, the Deutsches  Historisches Museum and the Ravensbrück Concentration Camp Memorial, among others, on the history of National Socialism, especially on post-war trials and the Nazi perpetration of women as well as on Jewish resistance. Most recently, she curated the permanent exhibition “In the SS-Auxiliary” – The Female Guards of the Ravensbrück Women’s Concentration Camp.

in the context of Künstlerische Forschung, Berlin

Image credit: Details of the uniform at the Memorial of Ravensbrück depot. Photo: Dominique Hurth, 2019.