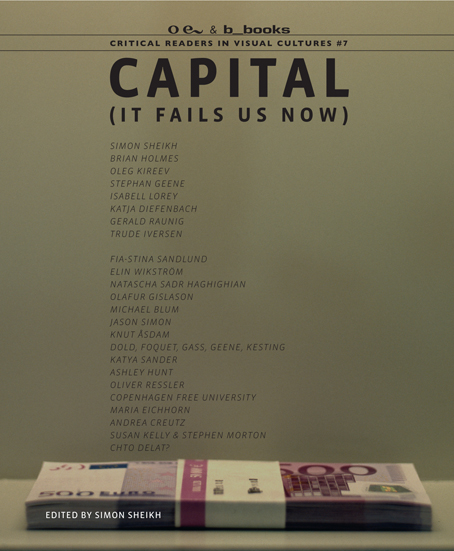 Capital (It fails us now)

Jahr
ISBN
Seiten
Preis in €
2006
978-3-933557-69-8
368
Vergriffen
What does it mean to live under certain historical conditions, such as the current hegemony of the capitalist mode of production? What does it mean in terms of economic and social relations, in terms of political space and imagination? How does capitalism affect our nervous systems, subjectivities and desires? These are some of the questions we have tried to pose, if not answer, in the exhibitions – held between Oct 7 and Nov 6, 2005 at UKS in Oslo, Norway and from Jan 7 to Feb 19, 2006, at Kunstihoone, Estonia – and in the present book project, Capital (It Fails Us Now).

In these pages a number of essays and projects take their point of departure in these specific models of (re)production and (re)distribution, and look at how production is changing in the Western countries, mainly from industrial production to immaterial labor, and in the East from state capitalism to a deregulated (post)industrialism with a new commodification and codification of the labor force, and thus of all social as well as economical relations. What are “new” economies, and what kinds of technologies of the self are they producing, and indeed, enforcing? Thus, in these pages you will find efforts to review the situation, asking what is to be done in this predicament of expansive global capitalism, corporatization of culture, the specularization of politics, and the marginalization, even criminalization, of the critical left.
Discussions range from the spectral form of value, (self)precarization, deregulation and the privatization of the welfare state to the development of alternative economies and the establishment of various modes of critique and resistance, cartography and historiography, inclination and inquiry, and the politicization of subject positions.

Stephan Geene: Meaningful, meaningless and free of all meaning: Subjects in spent time 75

Isabell Lorey: Governmentality and self-precaization: On the normalization of cultural producers 117

Katja Diefenbach: The spectral form of value: Ghost-things and relations of forces 141

Trude Iversen: Autonomy and the administration of aesthetics 193

Fia-Stina Sandlund: My business with the bikini king 200

Katya Sander: What is capitalism? 282