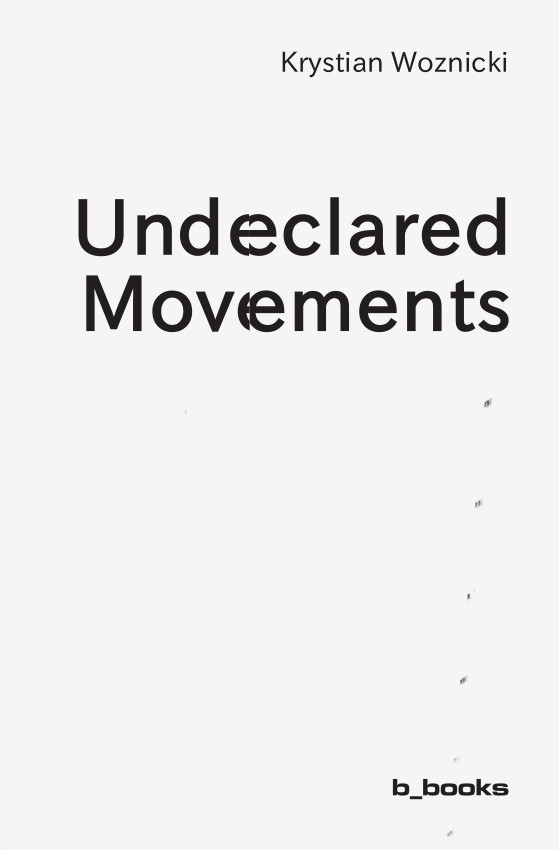 Jahr
ISBN
Seiten
Preis in €
2020
978-3-942214-31-5
285
15
Highly complex, thoroughly networked societies are so susceptible in some ‘neuralgic spots’ that a single pinprick is enough to trigger a catastrophic chain reaction. In this insecure situation, threats are being amplified by neoliberal restructuring in the form of privatization and technological rationalization. Thus, rather than creating sustainable public structures that would make it easier to avert preventable harm, already precarious lifeworlds are made even more precarious. Aggravating these insecurities is neoliberal governmentality’s attempt to incorporate threats as capitalizable assets. Here, the idea of prevention is displaced by preemption—a strategy of making potential threats securable and hence available for political and economic speculation.

In Undeclared Movements Krystian Woznicki explores the high price for and the limits of preemption. Zooming in on preventable ‘disasters’ in the Schengen Area – as varied as the “refugee crisis” of 2015 and “civil war” during the G20 in 2017 – Woznicki shows that the limits of preemption are manifesting themselves as enormous dangers for society, but also as opportunities for new forms of politics to arise. Written before the COVID-19 crisis, this book anticipates some of the urgent questions to be asked in the face of unprecedented yet preventable devastations: What does it mean for democracy that the exploitation of insecurities is contributing to the rise of increasingly AI-driven security industries, and public safety is being replaced by ‘national security’? What does it mean for co-existence that all of us are affected by the threats of densely inter-connected (and ultimately contagious) societies—but some are less vulnerable than others?
‍

205 Violence of deprivation
215 Who is disposable?
230 Whose exceptional politics?
247 Sensing undeclared movements

“Connecting the dots between the attacks of September 11, anti-G20 protests in Hamburg and the 2015 refugee crisis in Europe, Krystian Woznicki weaves a narrative that creates the basis for a new way to see the world through the lens of what macro power structures have intervened to appropriate the mechanisms of human movement-management. […] a provocative contemporary analysis that is part theory, part critique and part micro-gallery. ”—Mathana in spheres. Journal for Digital Cultures, October 12, 2022 (EN)

‍“At the center of Krystian Woznicki’s book are corridors as central components of infrastructures in de jure and de facto states of exception, where the governmental art of movement control and circulation management develops, but at the same time potential for new movement(s) emerge. […] Time and again, Woznicki takes a look at the productivity of […] attempts at movement enclosure and makes clear that even as-yet-unorganized movements in the making must be understood as political acts. In precisely these undeclared movements, he not only sees potential for resistance, but also situates an opportunity for other ontopolitics.”—Katrin Kämpf in Zeitschrift für Medienwissenschaft, April 11, 2021 (GER | EN)

‍“We need not be helpless victims of […] preemptive manipulations, deprived by them legally or even ontopolitcally of the fundamental capacity for action, according to Krystian Woznicki. In support of this optimism he cites the black bloc group tactics that originated in Italy and are able of expressing collective longing. In struggle this may entail direct violence, but in everyday life it means upholding values of solidarity and mutual care.”—Peter Kunitzky in Camera Austria International, 152/2020 (EN)

‍“In a time of pandemics, borders matter more than ever. Taking corridors as a privileged lens to analyze strategies of movement management in the Schengen Area after 9/11, Krystian Woznicki provides us with powerful tools to anticipate processes, conflicts, and struggles of emergent futures.”—Sandro Mezzadra, political theorist, University of Bologna, co-author of Border as Method (2013) and Politics of Operations (2019)

“Whose data are deemed ‘clean,’ and whose ‘dirty’? Woznicki’s bold portrayal of illegalized mobility challenges narratives of exclusion and data-fueled divides in search of ways to truly co-exist and co-interpret our shared reality.”—Inte Gloerich, technology researcher, Institute of Network Cultures, Amsterdam, co-editor of State Machines (2019)

“Undeclared Movements traces insurgence in its global connections. Intertwining text and images, it confers a haptic sense of the frictions, struggles and political forms that underpin and contest our logistical present.”—Evelina Gambino, political geographer and fractional worker, University College London, author of Beyond Seamlessness (2019)

“In closely observing the invisibilized movements of our society, Woznicki’s precise and thorough analyses reach their full scope in dialogue with and through the book’s numerous photographs. Calling for our observation, interpretation and sensibility, the image sequence unfolds a great richness: the ‘undeclared movements’ pass through it and pass silently through it again.”—Jean-Luc Nancy, philosopher, Université Marc Bloch, Strasbourg, author of The Truth of Democracy (2010) and The Disavowed Community (2016)